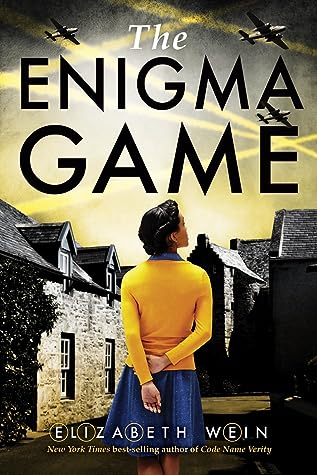 Thank you to NetGalley for this ARC! I first heard of this book when I was signing up for a book tour, and it immediately caught my eye because of its diverse cast of characters. Taking place in WWII, The Enigma Game is a story about 4 unlikely characters who get entangled in decoding german intelligence messages. There’s Jaime Beaufort-Stuart, a Scottish pilot in the RAF (Royal Air Force);  Ellen McEwan, a driver at the same airbase; Louisa Adair, a young black girl hired to take care of Jane Warner, an old (and secretly German) lady.

I enjoyed this book because it was a refreshing break from typical historical WWII novels, which are often intense, have characters battling in life-or-death situations, and tearjerkers. This book is a lighthearted and wholesome take on the events of the war, and more than that, it’s a story of kinship and acceptance. From the beginning, we follow Louisa Adair, a British girl of Jamaican descent. Because of her skin colour, everyone judges her differently, calling her slurs, and undermining her intelligence. I like Louisa because of her inner strength – She acts so much older than her young fifteen, and is not afraid to speak her mind or approach anyone, even an enemy soldier. Protect this kind soul.

Also, let’s talk about Mrs. Warner. Ok, so this lady is one of the most WHOLESOME, SASSY, HEADSTRONG, and AMUSING figures ever. If I had a list of most impressive old ladies, she would definitely be on it. Seriously, I would read this book for her alone. She owns an entire closet of fur coats (during a freaking war, I might add), smuggled rations in her underwear, and straight-up told everyone she was 60 even though she was 82. I want to be like her when I’m old.

Other notes about the book: This is a war story and a story about camaraderie first and foremost, it probably doesn’t have the blooming romance you’re expecting that’s typical with YA. The story takes you into the nitty-gritty of the war terminology, especially when it comes to airplane names, maneuvers, and the like, so it does take a while to get used to (since I’m a complete history novice). Pro tip: it really helps if you search up a picture of the plane, so you know what they’re talking about. In my case, I literally visualized an open-top, wright-brothers-type plane, and thus I was thoroughly confused when they talked about 3 people sitting inside a plane and someone standing up.

See below: plane I thought they were describing vs actual plane.

One more thing – KIND OF HAS SPOILERS – (Although tbh, its not that big of a spoiler)

Ok, chill, it’s not that dramatic. This is a book about WWII, so you can expect that some people will die right? Don’t worry, remember how I said earlier it’s not a tearjerker story? Anyways, I just felt that the death scene(s) fell a little flat because honestly, I didn’t really feel saddened. Idk if it was just lack of character buildup prior, or just my expectation from watching too many emotional war movies, but somehow it didn’t resonate with me as I think it should’ve.

Overall, this was a good book. Fun, lighthearted, and gripping at the right moments. This book gave me vague vibes of Amandla Stenberg in Where Hands Touch (2018), so if you enjoyed that movie please check this book out when it publishes in May!