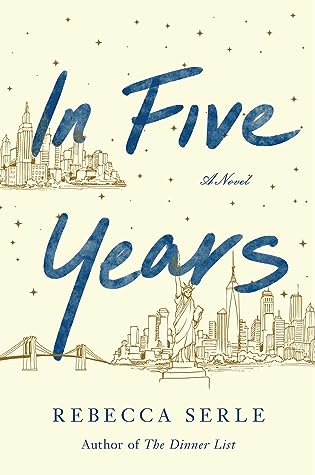 Where do you see yourself in five years?

When Type-A Manhattan lawyer Dannie Cohan is asked this question at the most important interview of her career, she has a meticulously crafted answer at the ready. Later, after nailing her interview and accepting her boyfriend’s marriage proposal, Dannie goes to sleep knowing she is right on track to achieve her five-year plan.

But when she wakes up, she’s suddenly in a different apartment, with a different ring on her finger, and beside a very different man. The television news is on in the background, and she can just make out the scrolling date. It’s the same night—December 15—but 2025, five years in the future.

After a very intense, shocking hour, Dannie wakes again, at the brink of midnight, back in 2020. She can’t shake what has happened. It certainly felt much more than merely a dream, but she isn’t the kind of person who believes in visions. That nonsense is only charming coming from free-spirited types, like her lifelong best friend, Bella. Determined to ignore the odd experience, she files it away in the back of her mind.

That is, until four-and-a-half years later, when by chance Dannie meets the very same man from her long-ago vision.

Brimming with joy and heartbreak, In Five Years is an unforgettable love story that reminds us of the power of loyalty, friendship, and the unpredictable nature of destiny.

**Thank you NetGalley and Atria Books for this ARC in exchange for an honest review.

After having a dream about living a different life with a different man five years in the future, Dannie tries hard to brush it off. Until four years later, she meets the man in real life. Aaron, except he’s happily in love with her best friend Bella.

Happy for her best friend and happily settled in her own relationship, Dannie does everything she can to prevent her vision from happening, despite the fact that us readers believe it will. However, as the story goes on, her actions conflict with her own feelings and her relationship with David, her fiance, deteriorates because of how the premonition has been affecting her. Also, it didn’t make sense since Aaron was very much in love with Bella just as Dannie and Bella were very good friends.

But then when Bella finds out that she has cancer, a bomb kind of drops on the plot line. As a reader, you tend to predict what will happen when something as contrived as this comes. It was hard not to feel like the author was finding an easy way out.

And then the plot twist came. Which really redeemed my view of the book but also left me in a mess of emotions. I felt terrible for misjudging the book. All the while we as readers were intently focused on the romantic aspect of the plot, Rebecca Serle was setting the theme of everlasting friendship as true love. I loved the nod to empowering female friendships, which evoked a few tears out of me.

The cause of my concerns was when reading the story, I was beginning to get Something Borrowed vibes. Bella was the best friend version of the pixie manic dream girl, the exact opposite of Dannie, which seemed to be a trope that appears albeit too often in books and movies. As a result, I just couldn’t stop comparing Bella and Dannie to Kate Hudson and Ginnifer Goodwin from Something borrowed, which made me have an instant dislike towards Bella, which was truly unwarranted for. And I think that this unfortunately made it difficult for me to read the book in an unbiased light. Had I not been so consumed by predicting the ending and the possible destruction that love would cause, I would have realized and appreciated the strong bond between Bella and Dannie.

But the coming to terms with ending, for me, shone some light about our outlook on romance stories, and how often times pop culture and media formulate stories where oftentimes falling in love leads to the demise to friendships. It was refreshing to finally realize that In Five Years this wasn’t the typical love triangle I expected to find, but rather the revealment of a strong bond between childhood friends. I applaud Rebecca Serle for that.