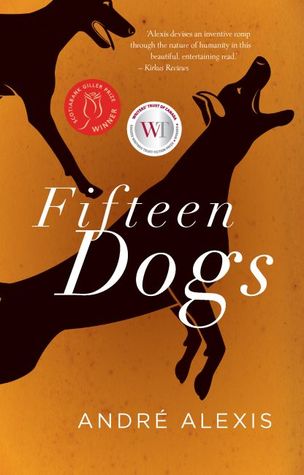 ” I wonder”, said Hermes, “what it would be like if animals had human intelligence.”

” I’ll wager a year’s servitude, answered Apollo, that animals – any animal you like – would be even more unhappy than humans are, if they were given human intelligence.”

And so it begins: a bet between the gods Hermes and Apollo leads them to grant human consciousness and language to a group of dogs overnighting at a Toronto vet­erinary clinic. Suddenly capable of more complex thought, the pack is torn between those who resist the new ways of thinking, preferring the old ‘dog’ ways, and those who embrace the change.

The gods watch from above as the dogs venture into their newly unfamiliar world, as they become divided among themselves, as each struggles with new thoughts and feelings. Wily Benjy moves from home to home, Prince becomes a poet, and Majnoun forges a relationship with a kind couple that stops even the Fates in their tracks.

André Alexis’s contemporary take on the apologue offers an utterly compelling and affecting look at the beauty and perils of human consciousness. By turns meditative and devastating, charming and strange, Fifteen Dogs shows you can teach an old genre new tricks.

Fifteen Dogs is a story about a group of dogs that escape from the clinic and develop a world of their own. They develop their own language and way of thinking among themselves. But when the pack become conflicted over this new lifestyle, they turn against each other and break apart. Some die while others move on. But this story essentially takes us on a journey to following the remaining survivors and how they face their new conscious.

On the surface, Fifteen Dogs seems like Animal Farm. However, it takes in a more philosophical and nuanced approach. It focuses on the struggles of a dog and the relationship between human and animal, while giving a thorough analysis on human feelings and beliefs through the perspective of a dog.

The book was such a strange and unique read, in a good way. The plot may seem straightforward and simple, yet the writing is so quite eloquent and well-versed. André really compels you to think about the human state and conscience.

The story takes place in Toronto and it felt nice to be familiar with the setting and places. While listening to the story, I could picture the dogs crossing over King Street or taking a walk in High Park. I think the sense of familiarity also brought in the appeal of reading this book.

Fifteen dogs is definitely a book for dog lovers; it will probably tug on your heartstrings. In hindsight, André must have spent a lot of time observing dogs in order to create such a insightful and descriptive narrative. The writing was very sensual and visual. I think it would be the perfect audiobook to listening to when taking a stroll in the park, perhaps petting a few dogs on the way.

One thought on “Review: Fifteen Dogs by André Alexis”