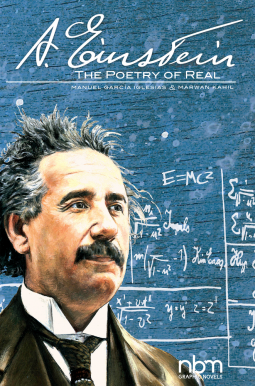 A father offered his son, a five-year-old Albert Einstein, a compass that triggered an irrepressible need to understand the laws of the universe and an iconic scientific career. At first a simple employee of the Swiss Patent Office in Bern, the young Einstein published a series of scientific articles that questioned everything previously understood in the world of physics. His theory, summed up by the formula E = mc2, opened to humanity the doors of the power of the atom. A legendary genius, but also a great humanist, Einstein lived through the first half of the 20th century, with all its horrors and contradictions, in the service of science, but distraught by what man’s madness is capable of doing with it.

**Thank you NetGalley and NBM Publishing for this ARC in exchange for an honest review. **

Marwan Kahil does a great job an encompassing the life of Albert Einstein into a graphic novel. Not only does it cover the prominent scientific discoveries that Einstein made over his career, the novel takes a deeper glimpse into his own life and his struggles as a Jew living in antisemitic Europe. I found it an enjoyable read where I learned quite a bit more about his works and his life.

The black and white artwork fits well with the story. I couldn’t help but notice the attention to detail on the architecture of Princeton University where Einstien taught in his final years or on the watchtower that inspired Einstein’s work in relativity.

There is a bit of dramatization, which is expected of a graphic novel. Yet I liked how Kahil wrote with detail about the people who influenced Einstein or who were important to him. This book is the perfect medium for students to get a deeper and more intimate glimpse at the man who revolutionized modern physics. It is definitely a book that school libraries should consider investing in.