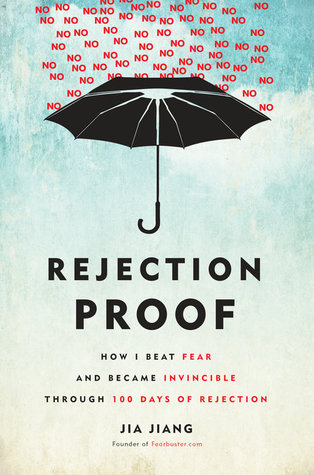 Rejection Proof is Jia Jiang’s entertaining and inspiring account of conquering his fear of rejection, offering a completely new perspective on how to turn a no into a yes.

Jia Jiang came to the United States with the dream of being the next Bill Gates. Despite early success in the corporate world, his first attempt to pursue his entrepreneurial dream ended in rejection. Jia was crushed and spiraled into a period of deep self-doubt. But he realized that his fear of rejection was a bigger obstacle than any single rejection would ever be, and he needed to find a way to cope with being told no without letting it destroy him. Thus was born his “100 days of rejection” experiment, during which he willfully sought rejection on a daily basis – from requesting a lesson in sales from a car salesman (no) to asking a flight attendant if he could make an announcement on the loudspeaker (yes) to his famous request to get Krispy Kreme doughnuts in the shape of Olympic rings (yes, with a viral video to prove it).

Jia learned that even the most preposterous wish may be granted if you ask in the right way, and here he shares the secret of successful asking, how to pick targets, and how to tell when an initial no can be converted into something positive. But more important, he learned techniques for steeling himself against rejection and ways to develop his own confidence – a plan that can’t be derailed by a single setback.

Filled with great stories and valuable insight, Rejection Proof is a fun and thoughtful examination of how to overcome fear and dare to live more boldly.

For a self-help book, I found this one of the most beneficial to me. Jia touches on something that I, as well as many others, have difficulty dealing with: the fear of rejection. He recaps his own quirky and unbelievable journey of rejection therapy and how it’s changed his own mindset.

Jia adds in hilarious and heartwarming anecdotes that really bring his book to life. Each chapter talks about a different stage of his journey and a different aspect of rejection. At the end of the chapter, he summarizes all the important points.

(For those of you interested, here is his blog: www.rejectiontherapy.com)

Although we as the readers do not experience firsthand the feeling of rejection therapy, we earn so many insights about learning to accept and in some ways befriend rejection. Some ideas that Jia bounces off of are quite interesting a new, while others are well-known, but just need that extra reminder. Not only that, he gives the book an extra push by showing the bright sides of rejection and revealing the steps to turning a rejection into an acceptance.

I feel like I came out of this book feeling refresh and motivated, as any successful self-help book would do for you.

I really enjoyed listening to this audiobook, which is quite short (4-ish hours at 2x speed) and it’s just very relaxing and fun listening to Jia’s stories being narrated to you. Sometimes, I break out smiling on the bus because of something funny he said or something funny that happened during his attempts to get rejected.

However, the book could have been shorter, and the second half of the book was not as engaging. Jia gets most of his main ideas across around halfway through, so the last bit is somewhat repetitive.

Nevertheless, I believe his message is quite clear: rejection is what you make of it.

Rejection is like cold turkey, it can be yummy or yucky, depending on how you cook it.